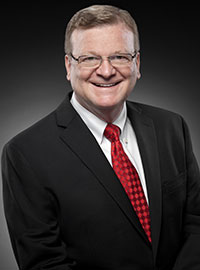 Alpharetta City Attorney Sam Thomas, who served under five mayors and two interim mayors over his 36 years at the job, died Tuesday, Aug. 24.  Thomas suffered a stroke over the weekend and had been in failing health over the past year.

Mayor Jim Gilvin expressed his sadness at the news and called Thomas a brilliant humble man of faith whose dedication to the city was only exceeded by his love for his family.

"Sam Thomas was one of the finest human beings I have ever known," Gilvin said. "He was a lion of a man, and those of us fortunate enough to know him will be eternally grateful for his service and friendship."

Longtime City Councilman Donald Mitchell, who worked alongside Thomas for the past 10 years called Thomas a champion for the city.

"He wanted to work a full load until the very end," Mitchell said.

Thomas graduated from the University of Georgia Law School in 1975 and joined the Atlanta-based practice Bovis, Kyle, Burch & Medlin that same year. He remained with the firm since, specializing in corporate law and real estate law.

But it was his methodic approach to government affairs that distinguished his career. He was appointed Alpharetta City Attorney in 1985 at a time when the city's population barely reach 5,000, and he shepherded its legal governance into a thriving suburb of more than 65,000 today.

Elected officials seldom challenged his guidance, and he was as well versed in state and municipal laws as those who wrote them.

"Sam was a terrific friend and a true public servant who loved the city and did his very best for the city," said City Administrator Bob Regus, who worked alongside the city attorney for more than two decades. "He was an excellent public servant protecting and defending our city for over 35 years."

Community Development Director Kathi Cook, who also worked with him over decades, was equally complimentary. "He had our backs 100 percent of the time, and he was a fearless champion for our city," she said.