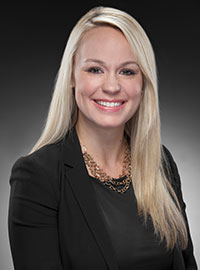 Hastings H. Johnston joined Bovis, Kyle, Burch & Medlin, LLC in September 2008 as an Associate in the Workers' Compensation Department.  She concentrates her practice on the defense of employers and insurers in workers' compensation claims and insurance coverage disputes.  Hastings has also handled breach of contract actions related to workers’ compensation claims in the United States District Court for the Northern District of Georgia, and has represented various insurers in workers’ compensation premium dispute matters in Tennessee and Georgia.

Hastings is a member of the State Bar of Georgia and of the Workers' Compensation section.  Hastings was named a Georgia Super Lawyers Rising Star in 2013, recognizing her as an up-and-coming attorney under the age of forty.