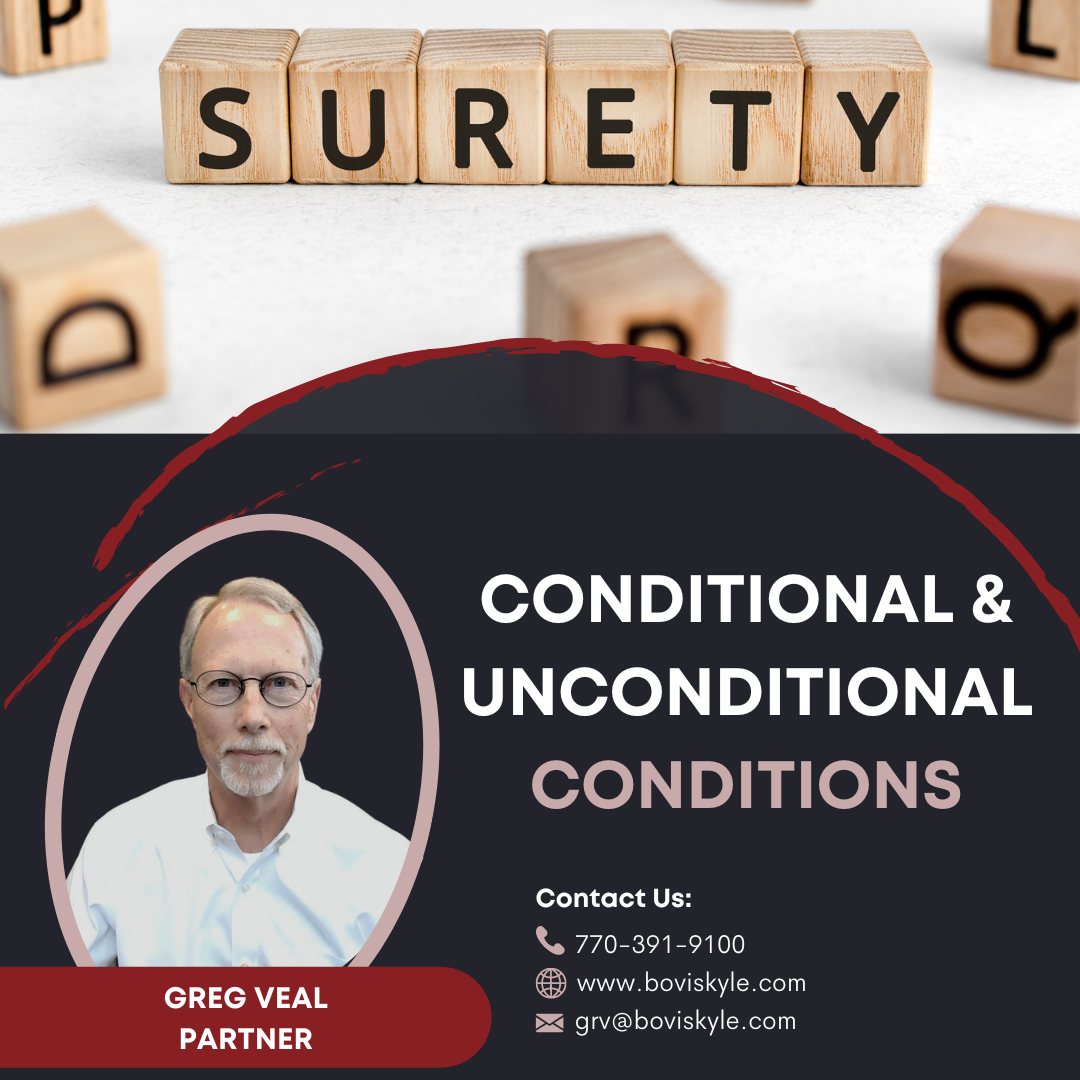 The 2010 version of the AIA Form A-312 performance bond is an effort to balance, and interconnect, the rights and duties of the obligee and the surety. It replaces the 1984 version with a few tweaks and one major shift of risk: requiring the surety to prove prejudice to enforce the notice requirement in Section 3.

Almost all bonds impose some condition, even if just, “NOW THEREFORE, the condition of this bond is . . . .” The A-312 bond, though, sets out perhaps the most developed set of conditions of any form. The obligee must

2. Notify principal and surety that declaring default is contemplated § 3.1;

3. Attend a conference if the surety timely requests it § 3.1;

5. Terminate the contract with principal § 3.2;

6. Notify surety of the default declaration and termination § 3.2;

8. Send a third notice to surety if an option is not chosen promptly § 6.

The majority of courts still read these conditions as enforceable and essential for the surety’s ability to exercise its options under the bond. How can the surety decide whether and how to perform if it has no notice, if the principal has not been declared in default and its right to proceed terminated, and if the balance of the price has not been committed? How can the surety know the obligee disagrees with the “promptness” of the investigation and decision-making unless the surety is put on notice?

Even if the obligee does not seek completion of the work but only enforcement against the surety of other contract duties, such as indemnification, the correct view is that the bond’s conditions apply to all of the surety’s obligations under the bond. That was the view taken by a New York court on February 28 in Prismatic Development Corp. v. International Fidelity Ins. Co.[1] The obligee knew about the costs incurred by other subcontractors resulting from principal/subcontractor’s deficiencies but neither notified the surety nor defaulted or terminated the principal, at least not for nine years. That was when another sub sued the obligee for those costs, and the obligee sought indemnification from the surety. The court, however, enforced the conditions precedent under the bond and discharged the surety, which the court observed was deprived of the ability to investigate or remedy the principal’s alleged default.

Notwithstanding such straightforward reasoning and the many courts in agreement, some judges can be determined to find a way around the bond’s clear provisions. North American Specialty encountered just such determination before a federal judge in Arizona last September in Burke Construction Group, Inc. v. Benson Security Systems, Inc.[2] The obligee had sent three letters, two of which informed principal and NAS that the obligee was considering declaring a default (but without mentioning a meeting). Fifteen days after the first letter and nine days after the second, the obligee sent the third letter, declaring default, terminating the contract immediately, and stating its intent to complete the work and charge the principal and surety. That is what the obligee did, beginning one week later, to the tune of $555,594.

The surety rejected the bond claim and defended based on the obligee’s failure to satisfy Section 3.1 (specifically regarding a meeting, which the court shrugged off). The court held the third letter satisfied the requirements of Section 3.2 for notice of default and termination, even though such steps are allowed only after the 3.1 meeting if required by the surety—which had no reasonable chance to do so in this case. The court also completely ignored the surety’s options upon default and termination and instead relied on the bonded contract’s general supplementation provision, which made no reference to the surety or the bond. The district judge was distracted by the surety’s internal e-mail noting receipt of a claim on the bond, despite failure to satisfy the bond conditions, which the judge considered to be evidence of ambiguity as to what an obligee must do to make such a claim.

As these two recent decisions show, the 2010 A-312 performance bond and its conditions precedent are fairly well known after almost 12 years, but agreement on the parties’ rights and obligations is not uniform. Obligees continue to raise arguments against the surety’s protections, even though the conditions of the bond are not burdensome. They require generally only communication and clarity, and they are not “technicalities” to be ignored.

The carefully crafted and balanced form expects the obligee to notify, inform, and involve the surety at appropriately early stages. It then requires the surety to decide reasonably promptly how to respond, and it provides for the obligee to alert the surety if that response is unacceptable or too delayed. Sureties should be able to depend on those conditions, but careful attention to the judge and jurisdiction are unavoidably essential. For further discussion of the bond conditions, including additional authorities, a longer version of this article is available here.