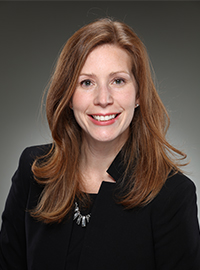 Angela Tartline joined Bovis, Kyle, Burch and Medlin as a partner in 2017 as a member of the firm’s Workers’ Compensation team.  She previously practiced in this area with another Atlanta firm for over 10 years.

Angie was admitted to the State Bar of Georgia in 2004 and has been a member in good standing since that time.  She is also a member of the Cobb County Bar Association.  She frequently receives invitations to present to clients and educational groups throughout the United States on topics related to her practice under Title 34, the Workers’ Compensation Act of Georgia.

Angie lives in Atlanta with her husband, Wayne, who is a partner on the firm’s Liability Team, and her children, Lincoln and Cassidy. In her spare time, she enjoys traveling, spending time with her family and friends and cheering on the Florida State Seminoles.