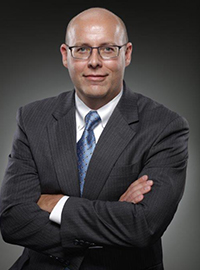 Eric Ludwig is a Partner at Bovis, Kyle, Burch & Medlin, LLC working with our corporate law and insurance practice groups.  He truly enjoys assisting clients with reaching the best outcome and his services have been used in 30 states (via pro hac vice associations with local counsel).  Eric joined the firm in 2016 as a lateral partner following more than a decade of practicing law with an Atlanta-based national law firm.

A native Kentuckian, Eric is licensed to practice law in Kentucky, Indiana, and Georgia.  He has represented clients before State and Federal Courts, arbitrators, and government agencies, including the United States Equal Employment Opportunity Commission (EEOC).

Eric is seasoned at addressing clients' needs from pursuing strategic initiatives for corporate matters and litigating from the initial investigation through trial and appeal.  He has successfully litigated and tried lawsuits involving allegations of exposure to toxic products, premises liability, and business disputes.  Representative matters include:

PRIOR EXPERIENCE & FAMILIARITY WITH COURTS

Before actively litigating on behalf of clients, Eric had the unique opportunity of beginning his legal career working for multiple federal and state judges, where he honed his skills on a wide variety of legal issues.  He held positions with the following courts:

Eric is a recipient of the “Rising Star” designation by Georgia Super Lawyers magazine.

University of Dayton School of Law