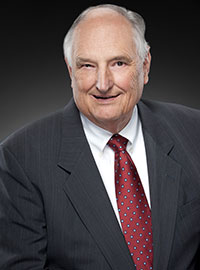 John Bovis began the practice of law in 1965 with the predecessor firm of Bovis, Kyle, Burch & Medlin, LLC. Upon his graduation from Emory University Law School, he joined the law firm, the historical roots of which can be traced to the late 1950s when Judge William C. O’Kelley began practice in Atlanta, Georgia. While serving as a partner in the predecessor firm, the firm was reorganized when Judge O’Kelley was appointed to the Federal Bench in October, 1970. His training and mentoring in both the insurance and corporate business practice came at the hands of Judge O’Kelley who continues to serve as a United States District Judge for the Northern District of Georgia.

John grew up in Kissimmee, Florida. He obtained a B.S. degree from Florida Southern College and served two years in the U. S. Army stationed in Germany. He obtained his law degree from Emory University Law School. While in college and law school, he was a member of Phi Alpha Delta and Omicron Delta Kappa. He is a life loyal Sigma Chi. He has spoken at seminars and has served as an ad hoc professor in litigation at Emory University Law School.