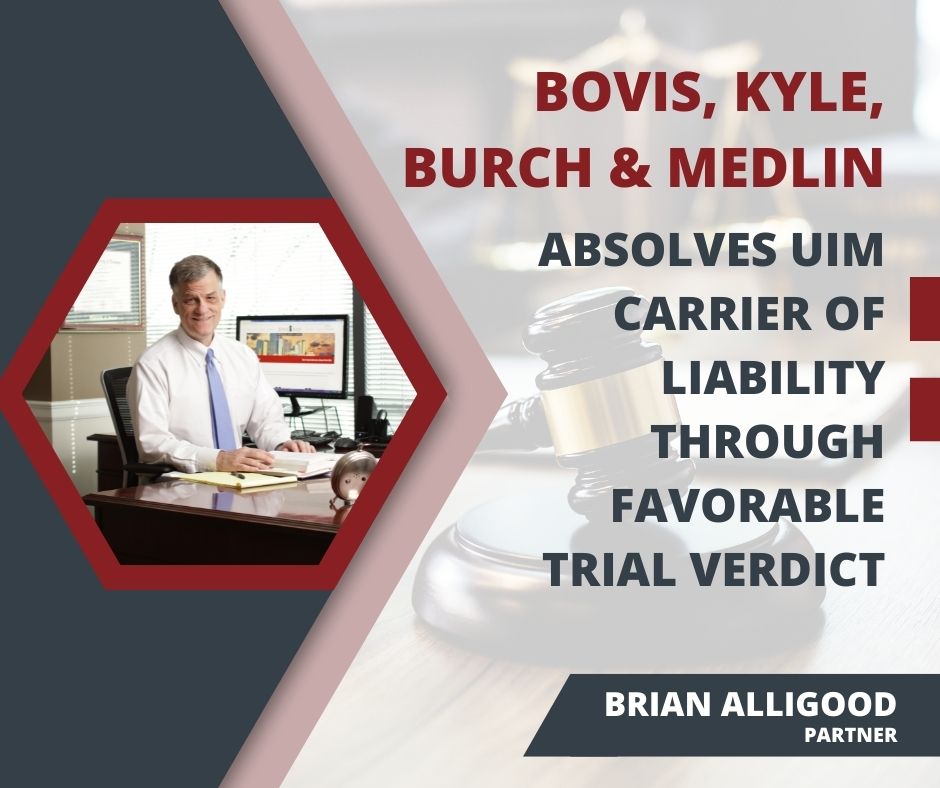 In a case tried in May in Gwinnett County, Bovis, Kyle attorney Brian Alligood successfully limited two personal injury Plaintiffs to a combined recovery of less than $11,000.00, despite medical bills approaching $100,000.00 and after their attorney requested roughly $300,000.00 in total damages during closing argument.

The case was filed jointly by the driver and front seat passenger of a vehicle that collided in an intersection when an opposing driver turned left into their path on a late Friday afternoon. The driver of the other vehicle admitted fault for the accident, and her liability carrier tendered its minimum liability limits to both drivers. Both Plaintiffs subsequently filed suit demanding substantial, additional monies from the UIM carrier that insured their vehicle.

Although the Plaintiffs’ vehicle was disabled by the collision, neither visited a hospital nor sought medical care that evening. The driver visited an Urgent Care center the next day, and the passenger visited a hospital emergency room two days after the accident. Both underwent x-rays, which were negative, and were discharged with form instructions for basic care of cervical strains. Both Plaintiffs then visited the same personal injury law firm, which referred them to an orthopedic practice that treated them under a lien agreement. Additional x-rays were negative, but the doctors determined more imaging was warranted and referred both Plaintiffs to a hospital for costly MRI studies which revealed some abnormalities, most of which were described by the radiologists as age indeterminate.

From there, both Plaintiffs continued to treat with the orthopedic practice and with a common chiropractor, whom the orthopedist also suggested. Multiple physical therapists were also seen by one of the Plaintiffs. The driver-Plaintiff tendered at trial medical bills exceeding $41,000.00; the passenger-Plaintiff presented medical bills exceeding $56,000.00.

The defense successfully argued that the vast majority of the medical bills were incurred for either pre-existing conditions, including the passenger’s extensive prior neck and back history, or for the purpose of building a claim. Mr. Alligood emphasized that the chronology of events showed that neither Plaintiff was seriously injured by the accident and that both followed a parallel course of action in visiting an attorney-referred orthopedic practice, which became an investor in the case by agreeing to defer collection of charges until after trial. He also demonstrated how both Plaintiffs experienced difficulty recalling the names of their doctors, the treatments received, or the costs incurred. These facts, it was argued, further demonstrated that the care was motivated by secondary gain purposes rather than for treatment of genuine injuries. The jury was also troubled that the Plaintiffs called no witness to appear in the courtroom, other than themselves and the Defendant-driver. In fact, the only other witnesses whom the Plaintiffs called at all, were two family members and a friend, all of whom appeared via Zoom despite being in the local area. No medical provider, not even those with direct financial interest in the outcome, testified.

The jury deliberated for approximately one hour before returning a verdict of $2,800.00 for the driver and $8,151.00 for the passenger. Because both amounts were far less than the liability carrier’s earlier tenders, no amounts will be paid by the UIM carrier. The case is an excellent example of the importance of looking beyond the medical totals and closely examining the circumstances from which they arose.